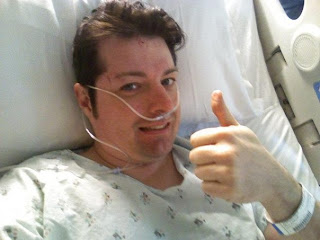 Chivalry is NOT Dead, It's just Bleeding. Please help out our Bassist Phillip Hill by sending any cash you can to the paypal donation center our friend Mass Giorgini set up for him. He has no health insurance and will be out of music action for at least three months.

Here is the donation email for paypal: helpphilliphill@gmail.com

"I'm finally home from the hospital after getting jumped by four guys on Friday night. These guys were attacking a girl in a parking lot where my car was parked and I tried to save her. They were basically grabbing the girl by the arms and pulling her back and forth. They may have been trying to force her into their car. I walked over and said, "Hey! What the hell are you guys doing?!" She broke away from them and ran over to me. I asked her if she was o.k., and she said yes and thanked me for helping her. Then the guys charged me and tackled me to the ground. I landed on my back on top of a concrete parking block, breaking four of my ribs and collapsing my right lung. Then all four of them took turns stomping and kicking my chest, ribs, and head. One of them ripped the side-view mirror off of my car and started smashing the glass into my face repeatedly.

As they were stomping me on the ground, I noticed that the girl was still standing there crying with her hands over her mouth. She looked like she was debating on trying to help me. I managed to make eye contact with her and yelled for her to "RUN!". Then they started smashing my face with my side-view mirror some more and stomping my face. I guess she got away while I had the thugs distracted. I managed to get into my car and lock myself inside. I started to call the cops, but they saw what I was doing. Then I realized one of the guys had my keys! They said, "Hang up the fucking phone and we'll give you your keys and 30 seconds to get out of here before we drag you out of your car and beat your fucking ass to death." I drove down the street, barely able to breathe because of my ribs and lung. As I was driving, 911 called back. I pulled over and told them I needed an ambulance. By the time the ambulance and the cops got there, the thugs were long gone."
Posted by The Fool Machine Collective at 12:46 PM

So, in case you bought the new record, but didn't notice that it contained a link to our lyrics and liner notes, here you go Thresholds From The Basement
Posted by The Fool Machine Collective at 12:28 AM