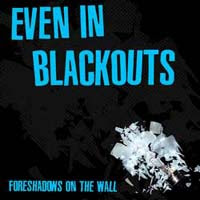 Foreshadows On The Wall
Even in Blackouts' second release, Foreshadows on the Wall, adds to the band's manifesto of creating acoustic music that is both powerful and melodic. Even in Blackouts have been stunning audiences with their highly energetic acoustic pop that transcends an amazing array of styles. The astonishing resumes of the band's members conjure a trend setting quality to their distinctive sound; a cast of some of the most influential artists in the pop underground today. Even in Blackouts is comprised of the stunning voice of vocalist Lizzie Eldredge, Screeching Weasel co-founder guitarist John "Jughead" Pierson, drummer Dan Lumley (Screeching Weasel, Squirtgun, Common Rider, The Mopes) and includes a special musical appearance by Danny Vapid (Screeching Weasel, The Methadones, Riverdales, The Mopes.) The band's distinctive pedigree espouses the notion of always to lead, never to follow. And this release is yet another chapter in a continually changing story arch for these trend smashing musicians. 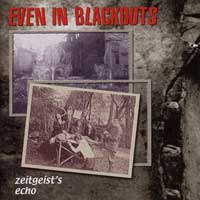 Zeitgeist's Echo
"The voice and words are what you might find in an indie
coffee shop in the mountains (I was thinking Seattle or Asheville, NC), wit
h a lot of folk influence, filtered through a strainer of Sunday worship service. Lizzie Eldredge is fluent in both the intimate tones of the coffee shop poet, and the husky shouts of a punk singer. She shows real talent, straining with intensity at the end of phrases, like in ‘Curtains part 1”. Harmony comes from guest vocalists and other band members, especially a duet with Dan Vapid of the Queers on ‘In A Letter..’. The ‘Curtains’ trilogy of songs turns the tension of relationships into a philosophical critique with a delicious vocal harmony at the end a
nd spoken word throughout the first part. The songwriting is calm and mature, exactly poetry put to song, haunted by images of morning and light, dying and ghosts of relationships past. It’s like they sat down and converted a beautiful painting into musical form.

Although Even in Blackouts may be relatively new, their members bring years of experience to the table with the complexity of Zeitgeist’s Echo. This will infiltrate the scene as a beautiful and unusual band that listeners of all types just can’t help listening to." 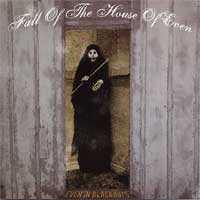 Fall Of The House Of Even
For their third full-length release, Even In Blackouts has taken another step in the progression of their sound. Every track on Fall of the House of Even takes a separate approach as if they were different rooms in a decrepit house. Each one of those rooms carries its own occupant, and with that entity comes different musical influences ranging from punk, bluegrass, jazz and R&B. Match the occasionally dark undertones with their always present energy and angelic female voice, and you get EIB’s most inspired release yet. 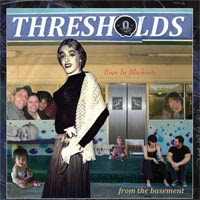 Thresholds From The Basement
Even In Blackouts' fourth and strongest release finds them once again pressing at the walls of their pop-punk origins to emerge with a sound that is richer, more unique, and more inviting than any record store category can define. 'Thresholds' is the diamond of their rough history. Recorded on a shoe-string budget, it holds the essence of all punk music.
Posted by The Fool Machine Collective at 6:14 PM