Hey for all November UK tours dates go to our My Space page.
http://www.myspace.com/eveninblackouts
Posted by The Fool Machine Collective at 12:54 PM

Here are the UK Tour dates so far. Plus the album release date is October 31st 2006. Scary!

Hello, some interested in helping us out with the recording asked about paypal. I have set up my Hope and Nonthings account to take these donations for EIB. If you are interested please send a response to this through myspace with your e-mail, your address and what package you want to donate at. You will receive a response from paypal with an invoice. As soon as the invoice is confirmed I will send out the buttons, etc. through snailmail plus a receipt for your donation.
thanks


AS A MATTER OF FACT ALL EIB ITEMS ARE NOW AVAILABLE THROUGH OUR PAYPAL.
SO IF YOU ARE HAVING TROUBLE GETTING SOMETHING OF OURS JUST E-MAIL US AND WE CAN PROBABLY GET IT FOR YOU.
eveninblackouts@hotmail.com
Posted by The Fool Machine Collective at 2:50 PM

To All Even In Blackout fans and friends. We have very little time to raise money to pay for our upcoming record Fall Of The House Of Even. We have no money and no label yet has showed any interest in paying our recording bill. So we have come with a scheme that can happily also be seen as an interesting creative move and of benefit to you, yes you our fans and friends.

We are taking donations of any size to help complete this record. Any donation of more than 20 dollars will get your name thanked on the cd booklet.

A: Any Donator Donating an amount of $50 receives their name on the new cd an EIB button, keychain and sticker plus any three of the following items:

Books from Hope And Nonthings:

From Even In Blackouts:
1: Zeitgeist’s Echo cd (signed by the current band)
2: EIB T-shirt (any design still available) These items can be found for perusing at interpunk.com
3: Signed copy of Fall Of The House Of Even (on or before its release date)

B: Any Donator Donating an amount of $100 receives their name on the new cd an EIB button, keychain and sticker plus:
The donator will submit their voice recorded up to 10 second via telephone call to us, cd, or cassette. This message can be anything: an advertisement for you company, a call out to a loved one, a long string of obscenities. Whatever your heart desires. This sample along with all the other donators will get mixed into a song that will be featured on Fall Of The House Of Even

C: Any Donator Donating an amount of $150 receives their name on the new cd an EIB button, keychain and sticker plus:
The booklet for Fall Of The House Of Even will be divided by rooms. Each page will be a room in a house. One room in this booklet will be named after whom ever the donator chooses. (Their own name, a loved one, a strangers, it doesn’t matter) For instance page three of the booklet could be: Maynard Schmerson’s Kitchen or Jello Biafra’s Library. (You don’t actually send us a photo, all the photos are actually of rooms in an abandoned house in Scotland.)

Please contact us through my space or through our hotmail account: eveninblackouts@hotmail.com
Do not send money for the last two donating options without first contacting us.

THIS OFFER ENDS JULY 15 OR UNTIL WE EXCEED SOME LIMITS

Even In Blackouts
Posted by The Fool Machine Collective at 5:15 PM

So, on this last tour after three weeks in Europe we flew from France to Scotland and from Ireland to Berlin and finished the tour in two more weeks. Does that sound easy? Well,it was. But the whole UK section was like a dream. There was no sleep, there was a deep fog over Scotland and Ireland and we were lead by the hand from gig to gig by three scottish guys known as Buzzbomb. We stayed at Billy Buzzbomb's amazing house (sanctuary). We made fun of our Irish promoter, daily, and gave him a long awaited nickname, Wheels (Sean McMully) Did I say we never slept? It was five shows in five days: Glasgow, Edinburgh, Aberdeen, Belfast, and Derry. And then at 5 in the morning the next day we flew to Berlin for a show that night to continue our European Tour. Wow! We were giddy, we were sleep depravated, and we had the most amazing amount of fun! Here are some pictures. 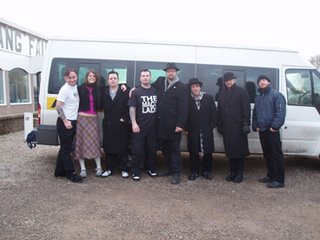 Buzzbomb and EIB somewhere on the road in Scotland 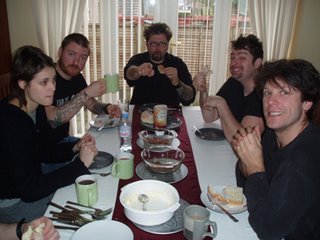 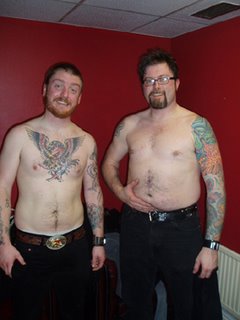 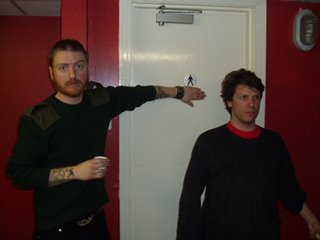 Bice and John up to some mysterious "No Good" 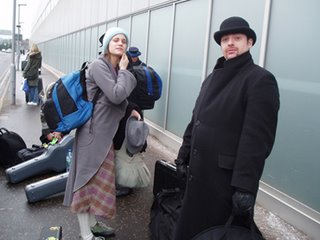 Phillip and Liz preparing for the flight to Berlin 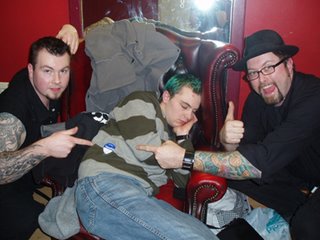 Picking on Wheels while he was asleep. Awwhhhh... Hehehehe.... Awwwhhhhh 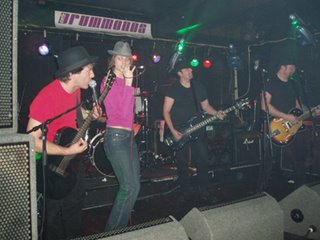 Oh Yeah. We played when we were in Aberdeen too.
Posted by The Fool Machine Collective at 11:12 AM

Hey, we just had a great rehearsal. We all traveled and flew in for two days to learn new songs for the upcoming record The Fall Of The House Of Even. We laughed alot, slept very little and now my ears are ringing and my nose is running. We are intensely excited about the new material, you can see sparks flying from Gub's head and Bice destroyed a cymbol (poor cymbol). The record has an insane amount of influences but seems to flow smoothly as well. We have allowed these inspirations to flow over us: Tom Waits, Violent Femmes, Screeching Weasel, The Clash, Tool, Benny Goodman, The Ramones, and yes even Nick Drake. We hope you all will like it. We do. We hope to have it out sometime before November 2006. Possibly much sooner.
We are talking with Insubordination right now about releasing it, but all is up in the air at this time. It WILL live!!
By the way the tour was made so much more enjoyable by the great hats that we were given by www.TheFedoraStore.com Please check them out and support the wearing of classy hats.

thanks
John Jughead Pierson
Posted by The Fool Machine Collective at 4:33 PM 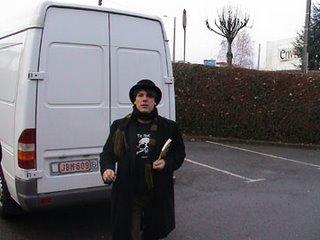 John was surprised to wake up in France - IN THE 19th CENTURY! 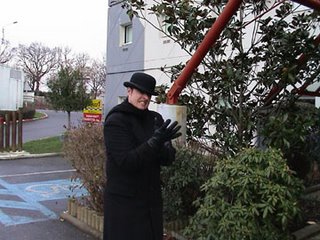 Phillip stuggles with his glove.  He is master of his glove. 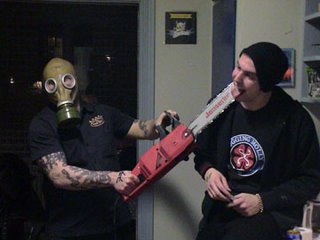 Those Darn Swedes! For a moment we thought Thore would actually do it. 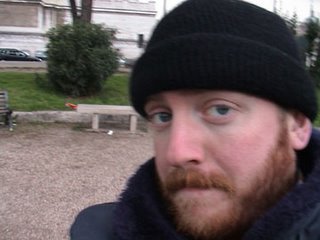 The Head Of Bice situated in Rome 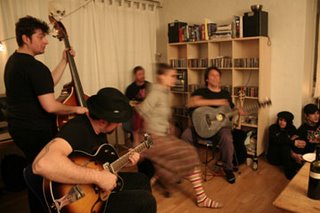 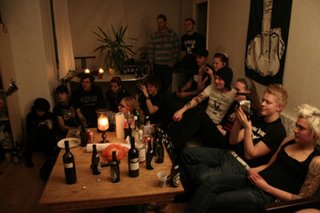 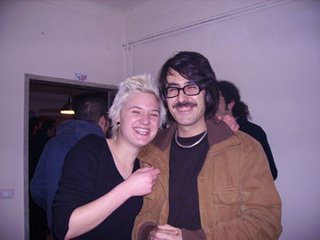 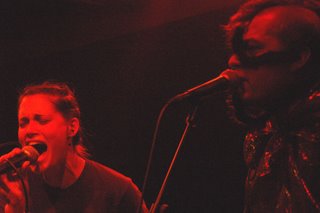 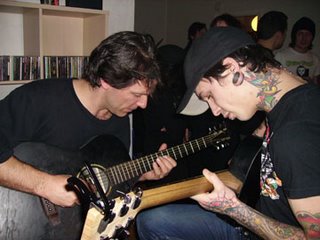 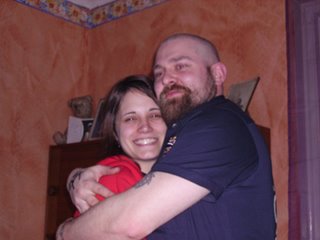 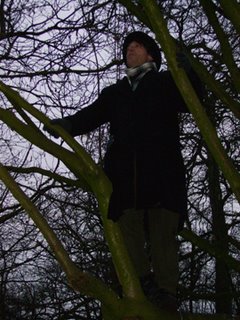 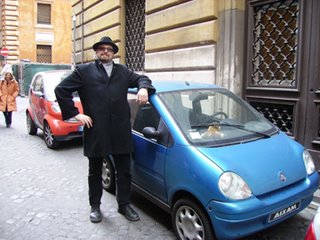 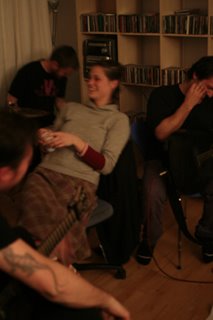 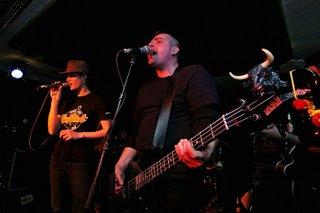 Here are some pictures taken by some friends on the road:
Renske Van Gennep
Bart Jonkers
Caramel Apple
Someone in Denmark (I don't know who - let me know)
Marc in germany (plus he has these too - http://www.photo.marc-gaertner.de/ )

Here they are in no order:
Posted by The Fool Machine Collective at 8:20 AM

Fall Of The House Of Even


Well Blackoutville. The day has finally dawned on the EVENs. We are diving head first back into the studio (Sonic Iguana) on May 7th and will not peak our heads out of that Indiana hiding place until we have a new full length record. This record will feature about 12 new songs and perhaps about 6 live songs recorded in France and Spain on our last tour.

The Lineup will be:

This record will have a much more raw edge and faster and slower songs. And we will be incorporating electric guitar, electric acoustic, and of course acoustic. We will also be having Phillip Hill playing his newly discovered instrument on a few songs: The Stand Up Bass. We are very excited and will have more precise information of its release soon.

thanks for your patience and continued support.

EIB
Posted by The Fool Machine Collective at 10:11 PM

Just a quick directive. Sadly I don't have much access to my own band's website, so I have been doing most of the changes on our My Space account. Check it out if you haven't been there:

http://www.myspace.com/eveninblackouts
Posted by The Fool Machine Collective at 9:05 AM

This has turned out much mushier than I had expected, but I can’t help it. The memories are flooding my brain and they can only escape as mixed and magnified emotions. I can’t help but see the poetry made manifest by the magical combination of these musicians, my friends.
Posted by The Fool Machine Collective at 9:54 PM