The Princess Foretold By Her Henchmen, Even 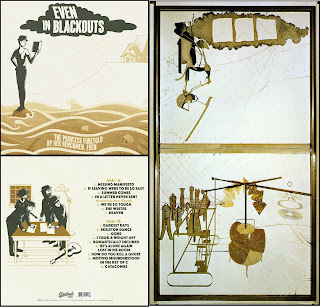 Even In Blackouts, over the years past the “break up” in 2009, had still been playing music together, spending vacations together, and also being there for each other as an extension to each one’s growing families. Since Jughead’s 50th Birthday, the pang that came from their musical separation became manifest, and since then the band has been finding any opportunity to play, record, and spend time together. Along the way friends and fans who have experienced this musical family in person have helped to keep some activity occurring. One of these is Stefan from Stardumb records. He approached Jughead and offered a home for the band’s first ever vinyl release. Each EIB cd had been released on different labels and the spreading of their music was and continues to be a difficult battle. Luckily there have been people over the years that believed in the sound and artistic leaning of the band. So when Stefan offered to remaster a compilation of the band’s songs on vinyl, Jughead told Stefan that one of the main influences on him during the time he started the band was the artist and historical trickster, Marcel Duchamp, and even though the Vinyl would be a compilation of old songs, he wanted it to be cohesive and a tribute to, not only EIB, but also to the work of Duchamp. One of the aspects of Duchamp was to create art that was not only about the image itself but that the work involved in its making, the history around it’s creation, the story within it, and the artist itself must be incorporated into the thought about the piece; imagination and contemplation must be a crucial part of engaging with any art form, and must then directly lead to engaging with the world around us. This new record, being released soon on Stardumb Records is an embodiment of this ideal and Jughead and the rest of EIB was amazed and impressed how deeply Stefan could incorporate, Duchamp’s art, into his creating of the cover art. Here is, side by side, the front and back of the Even In Blackouts soon to be released vinyl LP, The Princess Foretold By Her Henchmen, Even, and Duchamp’s The Bride Stripped Bare By Her Bachelors, Even. As another tribute to Duchamp’s piece done completely on glass, which cracked before completion, a limited edition of the EIB record will be printed on clear, glasslike, vinyl.

Posted by The Fool Machine Collective at 4:12 PM