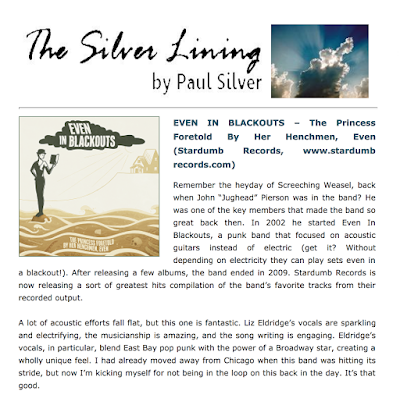 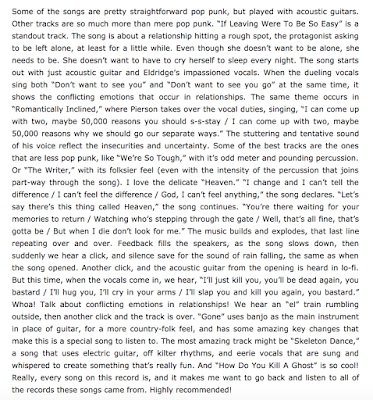 I don't know Paul Silver, but in this review of Even In Blackouts he touches on subjects and meanings that have been behind the intentions of my band for years. This is the only album he knows from the band. He is able to see some of the levels of the music we create just from a compilation, which is only a flavor of the story an actual album can give if writers and musicians take that extra step for the songs on an album to be considered an art project unto itself. (Concept records have always gotten dissed by many punks, perhaps because they think it doesn't draw from the raw spontaneous energy that punk tends to encapsulate. Or that it takes away from focusing in on the song itself. Or that pushing punk into the arena of art makes it elitist. I have always disagreed with these opinions, and think that denying punk music as an art form is one of the elements that is helping to dumb down our style of music. Simplicity does not mean you have to be unartistic.) My most favorite part of this review is that he recognizes the immense talent and the punk/broadway quality of Lizzie's vocals. I admit that Even In Blackouts often crosses the line as to what punk is described to be, but at the end of the day, the punk world is what I know and believe in. Knowing that my band hops genres I often hope for moments like this where a critic or just a music lover is able to see both the punk elements and the parts that transcend it's own genre, and see that as a positive element instead of a flaw or a wimpy approach.
Paul refers to not having hear the actual records. Anyone can now purchase all our records for cheap at bandcamp:
https://eveninblackouts.bandcamp.com/

Posted by The Fool Machine Collective at 9:36 AM